Got my car back from Walser Toyota after they “fixed” it. They did the worse job I have ever seen, they should be ashamed of them self’s. The hood has chips in it, the front grill is miss alined, there are different sized spaces around the hood and head lights and my steering requires me to lift my body to pull on the wheel before the car will turn. No honest dealer would call my car fixed, shame on you Walser!

I got my car back today after it had to go back to be corrected.  Walser Toyota is still not resolving the issue.  There are now chips on my hood and both front quarter panels that were not there before the accident.  Walser is refusing to fix them.

Avoid going to Walser, they are not honest and do not do a satisfactory job.

So today on my way home, I was driving north on Interstate 35w and got off at the 46th Street exit (as I normally do).  Today there was a car stopped on the side of the road, just after the exit.  As I came up to the exit, the car moved on to the exit, I slowed down to let him in since he was moving slower then I was at the time.  Then, the car in front of me slammed on his breaks and came to a complete stop (still on the exit ramp) and threw his car into reverse.  I was able to stop in time (but just barely, as I was going about 65mph at the time), but by the time I had stopped, he was reversing into my car at about ~25 mph (I don’t know, how fast can your car go in reverse).  I had just enough  time to hit the horn before he hit me.  The car backed into me, and took a hard left turn to get back on to Interstate 35w.

Sitting there bewildered of what just happened, I called 911.  After I told the dispatcher that I was on the 46th St exit, she told me they had it on video and she was going to transfer me to the person who was working on the case.

So the Minneapolis police had just pulled this drive over when he ran.  They were watching him on the camera and waiting for him to make his next move, with cops on the ready.   When he stared driving up the exit ramp, he saw the cop at the top waiting for him, so he thought it would be smart to back down the ramp instead.To bad they already have your licensee and know where you live.

The officer said he will arrest the driver late tonight, and they are adding evading the police and hit and run to his charges. 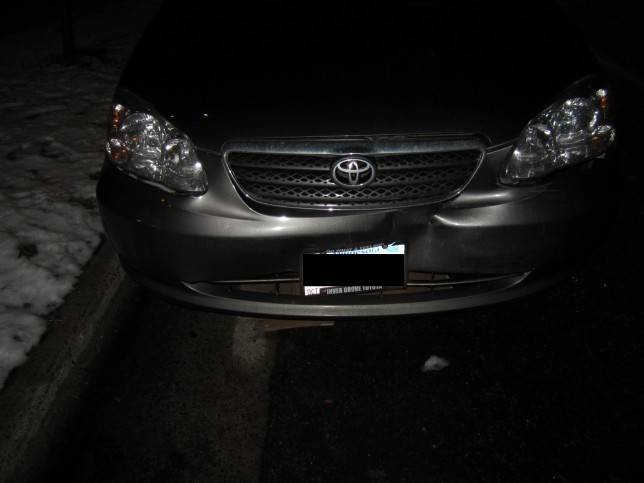